The Canadian justice system treats young offenders with special considerations. As such, they require lawyers that understand these considerations and how they affect youths. Only an experienced youth criminal defence lawyer can stand up for the specific needs of young offenders.

While there is an intention to hold youth accountable for their charges, the greater intent is to curb or reform criminal behaviour. As a result, young offenders have their own unique rights and privileges in court. These fall under the Youth Criminal Justice Act (YCJA).

What is the Youth Criminal Justice Act (YCJA)

The Youth Criminal Justice Act is the law governing youth justice in Canada. It applies to youth aged 12-18, who are accused of criminal offences. The sentencing is less severe than adult cases, and has more sentencing options at the discretion of the judge.

The principles of the Act include:

The overall goal of the program is to correct criminal behaviour through rehabilitation before adulthood. Where adult sentencing often seems to focus on the punishment, youth sentencing puts its focus on reformation and reintegration.

Part of this process is to ensure that the youth is held accountable for their actions in a way that ensures rehabilitation and public safety.

To this end, the Youth Criminal Justice Act provides judges with a wider range of sentencing options. The intent, it that this allows the judge to pick a sentence that will help reform the youth, while still holding them accountable. These include:

The YCJA is meant to prevent youth from getting stuck in a cycle of criminal activity. In part, this is accomplished through access to mental health care and special counselling. Additionally, youth sentencing is intended to minimize interference with their liberty.

In some cases, the Crown may allow youth charges to be resolved by Extrajudicial Sanctions (EJS). The accused does not make a guilty plea, but does make an admission of responsibility. In addition, they agree to sanctions such as counselling and community service. Once they complete the sanctions, the charges are withdrawn.

The conditions for an Extrajudicial Sanction include:

If you may qualify, a youth criminal defence lawyer will make an effort to have your case dealt with by an EJS.  One of the biggest benefits of this to your future is that there is no criminal record.

Do Young Offenders Get A Criminal Record?

Are Criminal Records Erased When You Become An Adult?

This is a popular misconception. A criminal record is not erased or sealed at the age of 18. This is why it is important for your youth criminal defence lawyer to fight against conviction or for a sentencing option that doesn’t result in a Youth Justice Record.

The offence and sentence type determine the length of time the Record remains open: 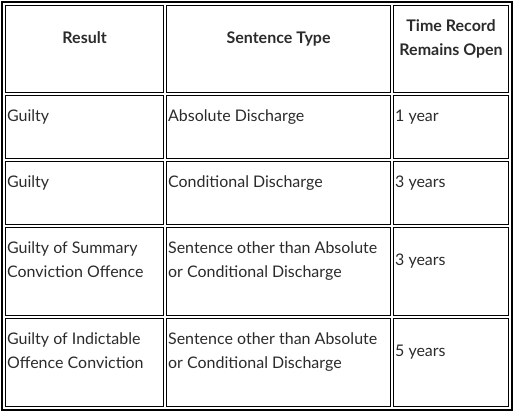 Other crimes committed after receiving a Youth Justice Record result in the earlier crimes staying open longer, sometimes permanently. Convictions for crimes after 18 while the Record is open result in the Record becoming part of your permanent adult criminal record.

Can Children Under 12 Be Charged As Young Offenders?

In Ontario, children under 12 years cannot be charged with a criminal offence. They are not arrested, and do not go to court. The justification for this is that these cases are rare enough that the system can deal with them through child welfare and mental health programs.

Can Young Offenders Be Tried As Adults?

The Crown must give notice of intent to apply for having a youth sentenced as an adult. This gives the youth criminal defence lawyer an opportunity to persuade the court that a youth sentence is sufficient to hold the accused accountable. If they establish this, the accused will not face adult sentencing.

What Charges Can A Young Offender Face Adult Sentencing For?

If the sentencing occurs before the age of 18, an adult sentence is still carried out in a youth facility. The exception is if there is reason to believe this will endanger the youth or others. If they are still in the youth facility when they turn 20, they may be moved to an adult facility.

Bail, and even probation, conditions for young offenders can be complicated and limiting. If misunderstood, it is easy for the conditions to be broken. This can lead to a cycle of criminal charges that becomes difficult to break, as well as limiting to personal freedoms. A Toronto bail lawyer, helps to navigate these conditions.

There are three justifiable grounds for pre-trial detention under the Young Offenders act. If the Crown can satisfy one or more of these conditions, detention may result. These include:

Primary Grounds are the most common reason for Young Offenders in Toronto to be detained before trial. Past failures to attend court dates, criminal history, and evidence of flight are often used to justify detention for primary grounds. The nature/severity of the offence and the strength of evidence can also be used. Their behaviour, characters and community ties are a third reason to detain under Primary Grounds.

If you or a loved one is facing charges as a young offender, you need a criminal lawyer who knows the ins and outs of the Youth Criminal Justice Act. The best criminal lawyer for you is one with experience and success representing young offenders. Contact youth criminal defence lawyer, William Jaksa today, and protect your future.

Likes, shares, and emoticons may not have a very gangster image - but...

Young offenders have their own special rights and privileges, but are...

Does A Youth Tried As An Adult Face The Same Sentencing?

Canada’s recent federal legalization of cannabis has been making...

The Parent’s Role During a Youth Criminal Offence Trial

Having your child face criminal charges is challenging for any family....