We have all wondered how Dr. Seuss’ the Grinch stole Christmas, but has anyone considered the criminal offences he would have been convicted of along the way? In his attempt to steal Christmas, because he hates Christmas so much, the Grinch committed a litany of criminal offences. In this article we look at some of the crimes the Grinch committed and the possible criminal charges the police could have laid. We will also consider how the Crown in the Ontario Court of Justice might have treated his case.

The Grinch hated Christmas, no matter if it was Jim Carrey or Benedict Cumberbatch playing Dr. Seuss’ the Grinch the hate was real, that was even clear considering the box office sales. That hate wasn’t only for Christmas Day, it was for Christmas Eve and the whole Christmas season, even in the animated film! 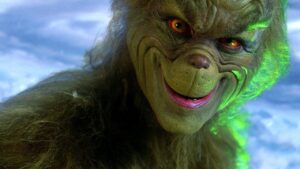 Putting aside why the Grinch stole Christmas, in the space of one night, he managed squeezed all these crimes in:

Breaking and Entering into a Dwelling

The crux of the Grinch’s idea, an awful idea, revolved around multiple counts of breaking and entering into dwellings. Over the course of one night, he snuck into every home in Whoville with the intent to steal all Christmas related items. He could have even been charged with Mischief for the damages committed during the break and enters. However, mischief under is not always a charge that police consider laying in these types of investigations.

The fact that he was entering a private dwelling increases the severity of the charges. And doing so knowing that people were home could upgrade the offence to a home invasion. Home invasions have the intention, or at least the potential, of violence. As such, these charges are treated severely. Courts in Ontario often sentence adults to more than  four years for a low-level home invasion and easily over five years if a firearm was used.

Although Dr. Seuss never tallied up the value of all the things when the Grinch stole Christmas, we can assume it was well over $5000. On his crime spree the Grinch was even caught red-handed by Cindy Lou Who trying to push a Christmas tree up a chimney. He took all of the presents, Christmas decorations, and food from each home. Even stealing from a single family, that would add up quick. But taken from an entire town, the value is certainly significant. The police would have most likely charged him with a count of theft under $5000 for every house he broken into.

The majority of thefts in Canada are under $5000 and are generally treated less severely. For instance, Toronto police no longer respond to calls for minor shoplifting offences. Often, these small value thefts are summary convictions.

When the value of the stolen goods/property passes the $5000 mark, the consequences ramp up. These offences are always indictable and can result in up to 10 years imprisonment.

Identity Fraud or Wearing a Disguise

Identify fraud is the fraudulent impersonation of another person to gain advantage or cause disadvantage. The Grinch dressing up as Santa could lead to this charge, especially in a world where Santa is apparently real, and likely seen as an authority figure. But most likely he would be charged with Wearing a Disguise during the commission of an indictable offence.

Merely dressing up as Santa Claus, doesn’t qualify as identity fraud on its own. A mall Santa, for instance, isn’t committing a crime. The purpose of their deception is for entertainment and doesn’t take advantage of anyone, nor deprive them of anything.

What would cause problems for the Grinch, but not for Benedict Cumberbatch in real life, was his interaction with Cindy Lou Who. He took advantage of his Santa Claus disguise to convince her that he was the Jolly old elf to steal her family’s possessions. This is a snug fit to the definition of identity fraud.

Animal Cruelty For  The Way He Treated His Dog Max

The Grinch could potentially face animal cruelty charges for his dog, Max. Merely dressing Max up as reindeer isn’t an offence. If anything, it’s just festive. The problem comes in when he tries to treat Max as a magical reindeer.

The small dog is forced to drag a sled, full of the entire town’s belongings, up a mountain. And then, after the Grinch’s change of heart, all the way back down. This could result in endangerment charges as the strain and risk for serious injury are intense.

Some have even speculated that the Grinch could have been charged with a number of terror related offences because of the impact his behavior had on Whoville. While its certainly possible terrorism charges could laid by the police its doubtful that a Judge would ever find him guilty of this.

Among the key sentencing considerations for judges are the aggravating circumstances. These are the factors that increase the severity of the sentence for trying to steal Christmas. Unfortunately for the Grinch, a few of these may come into play.

Committing a crime with malicious intent can quickly escalate the severity of the charge. While stealing for profit is bad, stealing to cause intentional suffering to the victim is worse. And Mr. Grinch proves to be a mean one indeed.

His crimes were specifically committed with the intent to cause all the Whos to, “cry boo-hoo.” The Grinch’s saving grace here is that this is difficult to prove. The only witness for this statement is his dog, who can’t testify.

Another aggravating factor is the planning and forethought that went into his live action. Between the suit, slay, and necessary organization to pull it off, it would be nigh-impossible to pass this off as a crime of opportunity.

Mitigating Circumstances that Helped the Grinch

Fortunately for Dr. Seuss’ the Grinch, he may find some redemption in mitigating circumstances. After The Grinch gets convicted for criminal offences there are mitigating factors that would allow for greater leniency and an earlier release date.

Medical and psychological factors may have played a role in the decision to commit the offences. The book cites that, “it could be his head wasn’t screwed on just right,” and his heart being, “two sizes too small,” as possible reasons for the criminal acts.

It is unlikely that the Grinch stole Christmas and would be found not criminally responsible. However, these conditions may be considered mitigating circumstances that could lessen the severity, and there would be no definitive release date for him.

Another mitigating factor is that the Grinch, just like Benedict Cumberbatch, displays genuine remorse for the actions and attempts to make amends. After his heart grows two sizes, he sees the error of his ways and returns all of the gifts, decorations, and food. The town seems to accept this gesture, they even let the Grinch cut the roast-beast at their Christmas feast. With this acceptance, It’s possible that the victims may not even press charges. It would have been a completely different story if this happened in New York, Toronto or even Berlin.

The mitigating circumstances could lead to leniency in sentencing if convicted.

What is a Criminal Defence Lawyer If you have been charged with a...

Diversion For Criminal Charges in Ontario

Many individuals facing criminal charges have questions about alternate...

What To Do If You’re a Tourist Arrested in Canada

If you are visiting Canada from another country, chances are you are...

Conflicts of Interest From lawyers to politicians, we expect a certain...

What Happens if I Fail to Comply With Bail?